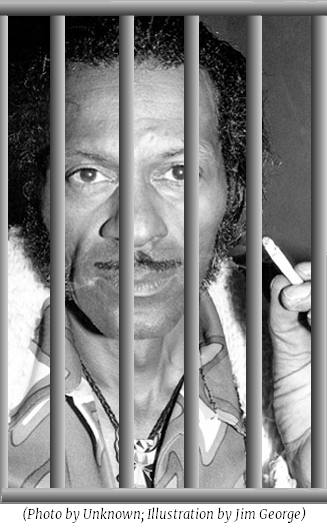 In 1979 when Chuck Berry, one of the founding fathers of rock & roll, was convicted of tax evasion and sentenced to four months in prison in Lompoc, California, I was moved—provoked, actually—to write a song about him. My mission was twofold: a) to pay tribute to his indelible influence on music in general and mine in particular, and b) to protest what I, perhaps naively, perceived as an injustice. Not knowing the full scope of the case against him, I nevertheless concluded that someone–possibly chromatically motivated–was out to make an example of him. That was in no way excusing or defending the illegal actions to which he pleaded guilty.

“This tax thing that I was in was no bum rap,” he admitted in a 1983 Goldmine interview. “It was straight, true…”

However, as deep in the heart of taxes as the charges might have been, many others who similarly broke the law both before and after him, and often for a lot more than the $200,000 he denied Uncle Sam, were given the chance to pay their debts along with hefty penalties/fines/interest without serving any time. Years later, Willie Nelson, for instance, ran afoul of the law to the sour tune of more than $16,000,000 (that’s 80 times more than what Berry owed), yet he never spent a day behind bars. Crazy indeed. In addition, Berry received a run-on sentence of 1000 hours of community service. Whereas Nelson was On the Road Again, Berry had No Particular Place to Go. At least for four months.

The song I came up with, “Free Chuck Berry,” was purposely structured like one of his trademark tunes: a three-chorder featuring machine-gunned lyrics mixing humor with an issue, all propelled by guitar licks plucked straight from the Berry vine. A Chuck Berry song about Chuck Berry. It was a very crude home recording, but to my knowledge, no one–other than Elephant’s Memory with their “Chuck ‘n’ Bo,” which had gone largely unnoticed despite John Lennon’s production”–had written such an homage to the legend, let alone a plea for leniency, and I naturally hoped he would be amused by it.

Unfortunately, red tape and Fed tape came between my tape and Chuck Berry. Prison officials sent my recording and letter, unopened, back to me marked “Unauthorized–Return to Sender.” The Sender was not happy.

After three calls to the joint and a round of pass-the-Chuck, I spoke to Berry’s cell-block leader and was informed that inmates, including the famous jailhouse rocker in question, were not permitted to receive any such packages containing bulk items. I guess it’s understandable; you never know what a convicted criminal might do with a cassette tape. And, admittedly, I did hope it would be considered a killer song.

“‘C’est la vie,’ say the old folks, which goes to show you never can tell”

(To hear the song, copy and paste): https://soundcloud.com/jim-george-101/free-chuck-berry-c-jim-george

(Unauthorized use and/or duplication of this material without express and written permission from this blog’s author and/or owner is strictly prohibited. Excerpts and links may be used, provided that full and clear credit is given to Jim George and byjimgeorge with appropriate and specific direction to the original content.)

I'm a writer, artist, songwriter, musician, and sound collagist. Working as a freelancer in the '80s and '90s, I interviewed a host of celebrities, including such legends as Gore Vidal, Muddy Waters, Steve Allen, Carl Perkins, Jean Shepherd, Willie Dixon, Nicolas Roeg, Bo Diddley, Steve Cropper, Dick Cavett, Junior Wells, Tony Bennett, and Buddy Guy for such publications as Starlog, Guitar World, Guitar For the Practicing Musician, Prevue and my hometown newspaper the Reading Eagle. Most recently, my interviews have appeared in Playboy, Cinema Retro, and Best Classic Bands. My fiction and artwork have appeared in Otoliths, The MOON, Dream Noir, The Sea Letter, The Ear, Defenestration, What Are Birds, Lotus-eater, Pennsylvania Bards Southeast Poetry Review, Fleas On The Dog, ANON, Hock Spit Slurp, Queen Mob's Tea House, The Five-Two, The Disappointed Housewife and Praxis. I have authored two books--Jim Shorts, a collection of stories, poems and drawings, and My Mind's Eyeful, an illustrated children's book, both available as PDFs at: https://payhip.com/JimGeorge In my musical life, I've written and recorded songs that were used as background on a number of television shows including Young Sheldon, Burn Notice, Sneaky Pete, Fresh Off the Boat, My Name is Earl, The Secret Life of the American Teenager and Vanished, as well as in the independent feature film Neo Ned (starring Jeremy Renner and Gabrielle Union). Bluesman Benny Turner has used lyrics of mine for a song he composed entitled "Who Sang It First." Fronting my own band, I have been a supporting act for such artists as Ian McLagan, Sonny Landreth, Joe Louis Walker, Simon Kirke, Walter Wolfman Washington, Kim Simmonds and Savoy Brown, Eddie Money, Starz, Johnny A, The Holmes Brothers, Trampled Under Foot and Gary Hoey, among others. View all posts by Jim George